Yesterday I started my season of winery touring! And what a beautiful day I had for it as well! The sun was shining, the temperature was hovering in the mid-20s and J decided to take the T-roofs out so that we could enjoy the sun and the breeze while we drove up to the ‘Westside Wine Trail’ in West Kelowna.

I decided to start off in West Kelowna for a couple of reasons. Firstly, there are some wineries located there that I have never yet set foot in, despite trying some of their wines, and a couple whose wines I had yet to try. Secondly, it is one area where all of the wineries are open daily this early in the season, and thirdly, it’s close enough to be able to do it in an afternoon!

Rollingdale Winery was the first stop of the day and Katey, the Wine Shop Manager, was lovely to chat with, as were Steve (proprietor) and Joe (winemaker) when they wandered into the tasting room while I was there. Katey poured me samples of their 2009 Reserve ‘Pino-cchio’, 2008 Stoney Slopes Pinot Noir, 2008 Merlot ‘La Droite (90% Merlot, 10% Cab Sauv), 2008 Cabernet Sauvignon ‘La Gauche’ (90% Cab Sauv, 10% Merlot) and their Tumbleweed Red, an easy-drinking, lighter-bodied red blend. My favourites overall would have to be ‘La Droite’ & ‘La Gauche’.

Next, we drove down to Beaumont Family Estate Winery, only to find that they were closed for the day as they were in the middle of bottling their new 2011 Pinot Noir Rosé, called Harmony. Louise very graciously invited us in to have a sip of the wine as it came off the bottling line. This was completely unnecessary but very appreciated! The rosé was delicious, and if it had been ready for sale, J would’ve snapped up a few bottles on the spot. Louise also let us sample a few of their other wines while we were there, including the 2009 Gamay, 2007 Pinot Noir and 2009 Heritage (Pinot Noir/Gamay blend). The 2011 Pinot Gris had just recently been bottled and was not open for tasting yet. In addition to the rosé, I quite enjoyed the Pinot Noir.

Just down the hill from Beaumont is Volcanic Hills Vineyard & Cellars, voted ‘Best New Winery’ at the 2011 Okanagan Fall Wine Festival. I have previously tasted many of their wines and have enjoyed them but had never visited the winery itself. The tasting room/ wine shop is huge! A vast array of wines and wine-and-food-related merchandise can be found here. I took advantage of this and purchased a red wine stain-remover kit to recover from some overly enthusiastic swirling I did at the previous tasting. Oops! Gina walked us through the wines on offer at the tasting bar, including some newly-bottled 2011 Pinot Gris and 2011 Rosé. The Pinot Gris had a lovely round mouthfeel and a nice crisp finish. The rosé, which is made from Gamay, had some nice acidity and will definitely be a hit on the patio this summer! I also tried the 2010 Elliott Road Gewürztraminer, which was a bit sweeter than I would generally go for with a Gew, but had such beautiful flavours and was so nicely balanced that I would happily sip away at a glass or two! Gina also poured me a sample of their 2007 Syrah, of which they had “found” about a case and a half. So rich, with delicious mocha notes.

On to winery number four: Mt Boucherie Family Estate Winery. I have been familiar with Mt Boucherie’s wines for several years and quite enjoy them. On this occasion I decided to try two whites and three reds. The 2010 Pinot Gris was nice and crisp, the 2006 Summit Reserve Semillon had a beautiful nose and a nice nuttiness to the finish. The 2010 Pinot Noir was only released quite recently and is much more of an old-world style than their previous vintage. This one has a lovely earthiness to it. The 2007 Syrah was tasty – I’m always partial to a Syrah. And to finish up I tried their 2008 Zinfandel. Mt Boucherie is one of only a handful of wineries in the valley that produces a Zinfandel, and no, it’s not the pink kind! This is a proper deep purpley-red big wine, perfect to accompany some venison steak or to sip on a chilly evening. The 2008 has some lovely caramel notes, along with a hint of violets and orange zest.

The next winery on the itinerary, Little Straw Vineyards, was much anticipated for me as I have only recently become acquainted with their wines and had not yet visited the winery. Little Straw came to pour a selection of their wines a couple of months ago at the BC Wine Info Centre in Penticton and I loved what I sampled there. At the winery, I decided to try the wines that I had not yet tasted and Peter Slamka, the winemaker, led me through some more delicious wines. The 2010 Pinot Noir Rosé tastes of beautifully tart rhubarb and, being a huge fan of rhubarb, I loved it! This will definitely be a regular in my fridge this summer. The second wine I sampled is part of their new label ‘La Petite Paille’ (or Little Straw, in French). This label is dedicated to more old-world style, food-friendly wines. I am already a huge fan of the Sauvignon Blanc and the Cuvée Noir, but had yet to try the 2010 Cuvée Blanc, a blend of Auxerrois, Pinot Blanc and Viognier. This will be another regular in my fridge this summer – a lovely, aromatic blend with beautiful mouthfeel, a hint of sweetness and nice acidity. Next, Peter brought out a shiner (un-labelled bottle) from the back room and poured me an anonymous white. It had a lovely freshness about it, clean flavours and aromatics, nice acidity with a bit of sweetness. He then poured me another white, shielding the label, and asked me to compare the two. The second wine was obviously a similar blend, but had much more richness to it. Turns out, the first wine was their 2011 Tapestry (Little Straw’s “flagship” wine), which has not yet been bottled. The second wine was their almost-sold-out 2010 Tapestry. Next in the lineup was the 2010 Riesling. At a ‘3’ in the sweetness scale, it was a bit too sweet for my liking but it was right up J’s alley so he picked up a couple of those. Then came another shiner from the back room. This one was another lovely rosé, with a deeper pink hue. This is apparently a bit of an experiment for Peter this year, but for my palate I would consider it a success! It was a blend of Pinot Noir and Lemberger (otherwise known as Blaufränkisch) and had a touch of sweetness to it.  I think it could easily become a big seller for the summertime. To finish off, Peter poured us some of the 2006 Lemberger Icewine. It was lovely and decadent, as an icewine should be. I will be sure to return here once the Barrel Top Grill opens for lunch service and enjoy some tasty food with their wines.

Moving along with the wine tour, we continued down to Quails’ Gate Estate Winery. This is probably one of the first Okanagan wineries whose wines I became familiar with, back in the mid-90s. Larry was behind the tasting bar and led me through a wonderful array of the Quails’ Gate wines.  Started off with the 2011 Chasselas/ Pinot Blanc/ Pinot Gris blend. The percentages change every vintage and this year it’s 40/30/30. Light, crisp and citrus-y. The 2011 Chenin Blanc was very lemony. This will soften throughout the year as it sits in bottle. The 2011 Rosé (85% Gamay, 10% Pinot Noir, 5% Pinot Gris) is just as tasty as previous vintages that I’ve had, light, crisp, refreshing rhubarb!  I quite enjoyed the next pours, as they were all comparisons between regular wines and reserve wines. First came the Chardonnays. The regular 2010 Chardonnay is split 50/50 between barrel-fermented (mainly French, a touch of American oak) and stainless steel and has lovely balance to it. The 2010 Reserve Chardonnay is 100% barrel-fermented in French oak. The oak is much more subtle and the wine has a lovely creaminess to it. It’s easy to understand the price difference between the two.  Next was a comparison between the 2010 Pinot Noir and the award-winning 2009 Reserve Pinot Noir (there was no Reserve made in 2010). Both were very delicious – the 2010 was a bit more fruit-forward, less earthy than the Reserve. Finally I compared the 2009 Old Vines Foch (vines are approximately 28 years old) with the 2009 Old Vines Foch Reserve (vines are 47 years old). While I enjoyed the regular OVF, the Reserve really blew me away. It was very earthy and meaty – delicious!! 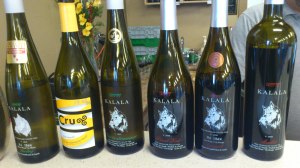 My palate was starting to get a bit tired by this point and my driver, J, was starting to complain of heatstroke (a new implant to the Okanagan from Northern Alberta, and the poor boy’s not quite used to our warm weather yet!) so we decided to stop at one more winery before heading home for the day – Kalala Organic Estate Winery. This is another winery whose wines (or at least some of them) I have tried before but had yet to visit the winery. As we pulled in to the parking lot, they were busy filling barrels with Merlot – it’s always nice to see the wineries in action. We were greeted warmly at the tasting bar, which is located in a corner of the tank room, so you’re able to see which wines are where. The 2008 Riesling had some nice minerality to it, fairly subtle flavours. The 2010 Nomad, by 3Cru Wines (a partnership between Kalala Winery and two other partners) is a beautiful aromatic blend of Gewürztraminer, Pinot Gris and Riesling. I quite enjoy this one with its hint of sweetness, lovely acidity and tasty flavours. I enjoyed the 2009 Gewürztraminer more than previous vintages. Some in the past had been too floral for my palate, but the 2009 is very tasty. The 2008 Pinot Noir is nicely balanced and would be a good food wine. The 2008 Zweigelt was my favourite of the reds, with beautiful fruit flavours and spicy black pepper. The 2008 Merlot had nice fruit and fairly chewy tannins – I would give it another couple of years to soften a bit.

Overall, I think the day out on the Westside Wine Trail was a nice way to kick off my season of touring. I will definitely return, and recommend it to friends! Lots of friendly people and plenty of tasty wines to choose from. 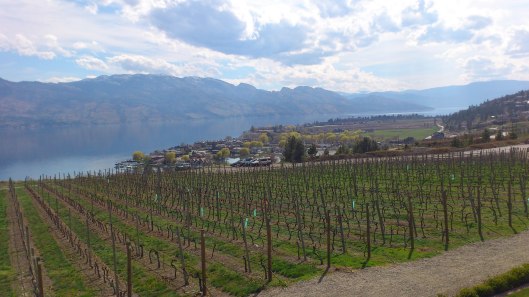 This year, as part of my New Year’s resolutions, I resolved to visit each and every winery in the Thompson-Okanagan-Similkameen areas of British Columbia by the end of the season (October 2012). And it worked out so very nicely that John Schreiner’s (@goodgrog) newest edition of his “Okanagan Wine Tour Guide” was released recently, outlining all of the wineries that are currently established in those regions!

So, I have started planning my touring dates and will very shortly be adding my commentary, tasting notes, photos, etc to this blog. Based on that book, I have 161 wineries to visit, plus a little side trip to Lillooet to Fort Berens Winery. Of those 161 listed, not every single one has a physical winery, but I will attempt to taste at least a couple of wines from those I cannot visit. 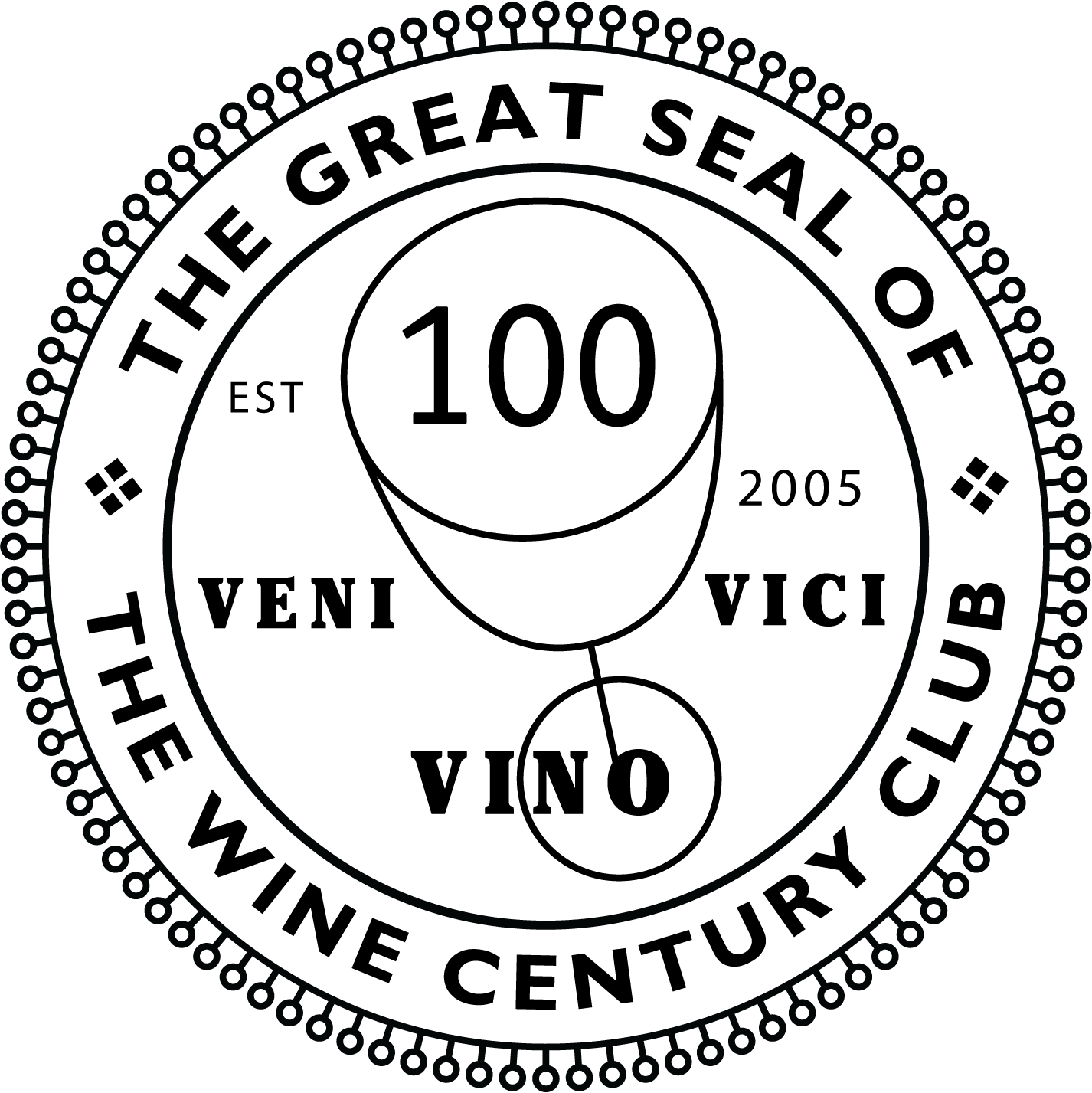 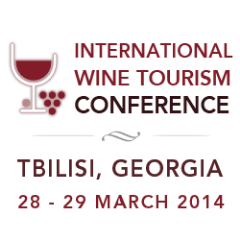